In 1973 a study in the Journal for the Scientific Study of Religion surveyed 434 people in the Greater Los Angeles area and found that approximately 44 percent of respondents had experienced some sort of encounter with the dead. Respondents reported contact through direct visits from the dead, séances and most often dreams, which accounted for over 60 percent of encounters. The study grouped participants by various demographic factors, such as age, gender, and ethnicity. However for my purposes I intend to engage more broadly with the simple finding that almost half of the respondents reported direct encounters with the dead. Until relatively recently, I wouldn’t have entertained the possibility that these experiences are in any way “real.” I would have dismissed them as dream figments or hallucinations. However, in reality as I experience it, I am in no position to dismiss the experiences of hundreds of people simply because they are incompatible with my prior assumptions of the world and its operations. 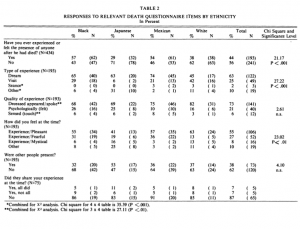 The study found significantly more encounters with the dead among less educated respondents. In this context, we can view education as a mode of socialization. This demographic difference is notable because it shows that just as formal education is intended to expand one’s knowledge base and critical thinking, it can also function to establish a dogmatic worldview which may render one averse to incompatible information and ideas. In this way, formal education as a mode of socialization plays a key role in shaping, and perhaps limiting, our perception of reality.

Whatever the case may be, this study shows that what we perceive as real is based on the interplay between our individual comprehension of sense perception and the reconciliation of our own comprehension of sense perception with that of other people within our social context. In this way, our perception of reality is not objectively informed. Rather, what we accept as objective is informed by our respective context. It is unlikely that we can shed the assumptions based upon which we categorize the real and the unreal, as an inability to discern reality would likely cause a great deal of distress. However, even if we can’t shed these necessary assumptions, we can still acknowledge their existence and their variance between individuals. If we accept that the foundations upon which we base our understanding of the world are just as unstable as those of the next person, then perhaps we can resist the urge to dismiss the experiences of ourselves and others, however impossible they may seem within our respective worldview.

About the Author: bangl167