Often times the memory of someone lingers on with us through material objects that they favor, or sensory information that we link with them, be it the scent of a certain perfume or the taste of their favorite food. Their persona lives on through the living, in the kind of afterlife that Sheffler touches on. However, in Scheffler’s discussion, there are notions of the intent of the deceased for their continued agency in the living world post death. I intend to open the discussion to how the intentional reproduction of memory by the living adds to notions of afterlife and legacy, specifically through Felix Gonzalez- Torres’ 1991 piece, Untitled (Portrait of Ross in L.A.) 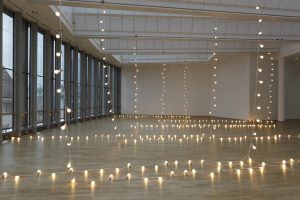 A Cuban born visual artist, Gonzalez-Torres focused his work on questions of public and private, love and loss, sickness and rejuvenation, and gender and sexuality, primarily producing minimalistic installation and sculpture. It is significant to note that his work, specifically the piece meant to be discussed, is a direct result of his experience as a gay man, and one with experiences having to do with AIDS. Working with process, much of his work has to do with both the work, and the audience, as the process of the audience’s interaction with the work serves as another layer (sometimes the crucial layer) to the piece. The very meaning for his work relies upon its interpretation, reminiscent of the dead relying upon the living for continued meaning in the living world. 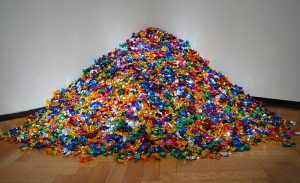 Untitled (Portrait of Ross in L.A.) a piece that has to do with collective loss and participation in it. The premise of the piece revolves around Gonzalez-Torres’ late boyfriend, Ross Laycock, who passed away in 1991 due to an AIDS-related illness. An installation, the piece comprises of 175 pounds of shiny pieces of candy, meant to represent Layock’s weight while heatlhy. The audience, who are meant to take the pieces, play an active role in both memorializing, as well as contributing to his loss. The replenishment of the installation, and subsequently, its longevity (an allegory for the longevity of Ross’ life) is left to the gallery — they choose whether to replenish or not, as well as how frequently, acting as a sort of God figure, the decision of his longevity placed in their hands. This gives the piece an ethereal, ephemeral quality: while the installation is between exhibits, where does Ross’ memory lie? Is it within the pockets of all of the audience members who have taken a piece of candy throughout the years, or is this symbolic of his death, until the exhibit can once more be created in a different space? Is he forever memorialized, or is his consumption symbolic of his loss. If we personify the piece as a literal embodiment of his spirit, it’s almost as though the piece understands its own temporality, constantly shifting and appearing in different ways, its very existence contingent on the living. Is this another way of understanding spirits? Under Scheffler’s argument, does Ross not live on in this afterlife of the living? Further, how does Ross’ lack of knowledge regarding this piece’s existence help or hinder the personification of the piece: is it in memory of, or can it serve as an actual representation of him?

Delving back into concepts of kinship and accountability, how can we read the fact of the audience literally consuming his weight? Is this preservation through participation, or mere apathetic consumption, reminiscent of the general societal apathy towards AIDS? Further, how can we interpret Gonzalez-Torres artistic choice to use pieces of candy? Why are we eating Ross, rather than just taking from him? This forces the audience to not only physically take pieces of Ross, but the element of consumption also touches on cannibalism. In using hard candies, not only must the piece be continuously produced, using resources, but it is also truly consumed, dissolving on the tongue. Perhaps the sweetness invokes personal memory of Ross, however it also creates a jarring duality of pleasurable sensation in consumption of another.

Lastly, this piece also discusses themes of sacrifice through the juxtaposition of consuming Ross while celebrating his life at the same time. Using Lambek’s thoughts on sacrifice, which category of sacrificial practice does this fall under? How is sacrifice vital in order for continued existence? The whole point of the piece is taking the candy, but in doing so he diminishes. Is this non-sacrificial ritual killing, in order to further the life cycle, or is it death of one for the life of another? If read as non-sacrificial ritual killing, it can be argued that the audience’s participation in his diminishing weight is motivation for its replenishment by gallery authorities, continuing the cycle of this piece. Alternatively, it can also be seen as consumption of him until “death”, in order to further his memory through experience of the piece.

Ultimately, this piece has become iconic in the art world, as well as in online circles. Wittingly or unwittingly, Ross lives within the audience, literally and metaphorically. His legacy continues, bittersweet.