I have a great deal of respect and admiration for the creators of the show Rick and Morty, in large part due to their comical and captivating responses to issues relating to existence and the infinite. While the show is set in a fictional universe with extravagantly sci-fi hypotheticals, it poses intriguing questions in each of the episodes. The series follows a drunken but brilliant scientist and his grandson on their slightly strange adventures, as they deal with multiple dimensions, versions of the self, and questions of identity. In this episode in particular there is a focus on the concept of multiple universes, ending in a way that suggests a notion of life beyond death.

In the sixth episode of the first season titled “Rick Potion #9” they deal with the idea of multiple dimensions, or the “multiverse”. A similar concept exists outside of the fiction of the show, and has also been referred to as the “meta-universe.” These both propose the same idea, namely that there is an infinite set of parallel universes that comprise of everything that exists. These universes happen simultaneously, suggesting that as we go about our daily activities there are countless other versions of us experiencing precisely the same thing, but with the opportunity for their actions to shift ever so slightly from those we are experiencing in our own universe. This idea can get heady rather quickly, but is illustrated in a simple and humorous (albeit dark) way in this episode. 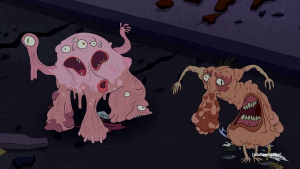 Rick and Morty are able to travel between universes with a portal gun that Rick invented, which is the main way the episodes explore alternate realities and the depths of space. In the episode, Rick and Morty somehow manage to destroy their world beyond repair, turning every living human into distorted creatures with no hope of returning to their original state of existence. Realizing that they cannot possibly live among the Morty hungry monsters they have created, Rick searches for a solution to their problem. He finds one in the multiverse.

In order to return to their regular lives, Rick and Morty find a parallel universe in which they found a cure to the epidemic that ruined their own planet. However simply moving to a planet where their counterparts found a cure would pose problems for the resident Rick and Morty, so they must find a planet where the resident versions of themselves die shortly after they cure the disease. 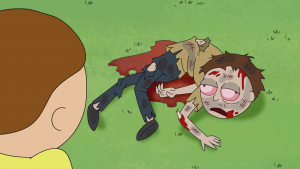 They find a close version of their own reality and arrive just at the moment that their parallel selves die, experiencing the abrupt ending of their own lives, but also in a sense the beginning of their new lives. The new Morty that takes the place of the old Morty is no less Morty than he was before. In fact, he is still alive even though he has just died. This was an interesting parallel to the notions of immortality that we have been discussing. I feel that this is such an abstract concept that it hasn’t gotten much attention, and I realize that it is a largely hypothetical situation. What was most interesting about this to me was the idea that even if a piece of you goes, this notion of eternal realities suggests that the essence of you will be forever present in the universe, because we don’t exist singularly but are scattered across all of these infinite worlds.

I wonder though if this is a comforting thought, to feel as though you are part of something much larger, and that the essence of you is immortal. On the other hand, the replaceable nature of death laid out in this episode seems to counter certain ideas of immortality, suggesting that even though there are endless versions of us out there, we’re all going to die and there’s nothing beyond that. 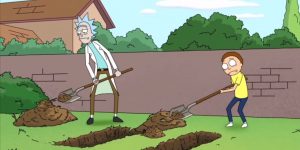 Morty in the aftermath: