The House of The Scorpion

The House of the Scorpion by Nancy Farmer is a science fiction story set in the not so distant future in what we know as Mexico. Set on an estate that produces massive quantities of Opium and is ruled by a powerful drug lord named Matteo Alacran, the story depicts a disturbing but likely portrayal of our future. The narrative follows the life of a young boy named Matt, a clone of the drug lord created to provide vital organs to his predecessor. Matt is the most recent of 8 clones of Alacran, who is rumored to be 140 years old. In the story Matt is kept in the dark about his true identity, but is treated as though he is one of the descendents of Alacran. There is tension between him and the actual grandson of the drug lord, who sees Matt’s existence as a threat to his claim on the Alacran estate. This brought up an interesting thought to me, which was that of lineage. Since Matt is the direct replica of Matteo’s DNA, he is closer in derivation than the actual grandson. Shouldn’t this, technically speaking, give him more claim over the property and assets belonging to Matteo Alacran? This is speculation muddled in ethics however, and I cannot begin to theorize about the values and principles that will be standard in some near distant future. However it also reminded me of a discussion we had in one of our earlier classes about descendants being something that could be deeply connected with the idea of immortality. If it was possible for Matteo Alacran to reproduce himself and control the replicated versions environment, education, and experiences, why was he incapable of allowing himself to pass on? How were these clones any different, or any less valuable, than the son and grandson he produced through natural means?

Most clones during this distant future are injected at conception with a substance that makes them brain dead, I can only assume to ease the conscious of the public. However the clones of Matteo Alacran are privileged and allowed to be left alive and treated with respect until the time comes to harvest them. This posed another intriguing question to me; is it less cruel to allow a clone assigned for imminent death to live, experience connections, love, beauty, humility and pain, than to never let them gain consciousness at all? On the one hand it seems rational and kind to cut off the mind from ever existing. This would seem similar to growing organs on their own, not attached to any corporeal being, or reminiscent of the brain dead patients kept alive by feeding tubes and breathing machines. But to induce this would be a decision made by whoever created the clone, and this seems to step beyond the boundaries of what man can control, and into the jurisdiction of God. However the other option could also be argued to be more humane in that it actually allows the subject to experience life, it’s undeniable purpose. In the same vein though, is it more cruel to grow depth as an individual being and have that taken away on a whim? Is one any better than the other?* 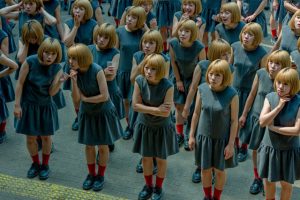 From this realization, another thought captured my interest. It was the fact that this man who was striving to be immortal was incredibly wealthy and powerful, as well as being one of the few people to attempt such a thing. This reminded me of a recent class reading we had that mentioned the distinctions between the rich and poor, and how this would likely parallel distinctions between the immortal and mortal. This notion that immortality is for purchase becomes an apparent reality in this text.

Near the end of the book at Matteo Alacrans funeral, the recently departed drug lord kills off all of his living relatives by demanding in his will a toast be given, and that all attending his funeral drink from a bottle of wine that, unknown to them, contains poison. This last action, after life, was meant to ensure that if Matteo did not live forever (which he wholly intended to do), neither would those who could benefit from his death. This brought to light the question of power in relationship to immortality. It was Matteo Alacrans last wish that if he wasn’t able to live forever, he would still have some control over death, at least the deaths of others. This last sad grasp at control reveals the true desires that accompany the need for immortality. It seems that greed and selfishness avail. Matteo was unable to allow an exact replica of his being take over his role, just as he was incapable of letting anyone he knew and held closely live beyond himself.

* Tangentially, this made me think of an episode from the show “Rick and Morty”, where the protagonist mad scientist Rick creates a series of duplicates of himself, each paused at a different age in their development and housed unconsciously inside fluid filled preservation tanks. In this story the clones are created not for spare organs, but so that Rick can transfer his consciousness into their bodies. However this comes with a host of problems, namely that the old brain of the original Rick has difficulty adjusting to the young body of what is dubbed in the show “Little Rick”. 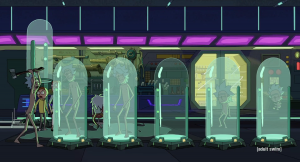 While this is a work of science fiction, it mirrors certain aspects of cognitive science. In an article I was reading on CBS two Italian bioethicists were quoted saying, “‘Modern cognitive science shows that our cognition is an embodied cognition, in which the body is a real part in the formation of human self… Therefore, the person [in this situation Rick] will encounter huge difficulties trying to incorporate the new body in its already existing body schema and body image.” The involvement that this image of the self and the body has on human identity is powerful, and simply transferring the brain of one individual onto the body of another could create a distorted experience for the being in question. 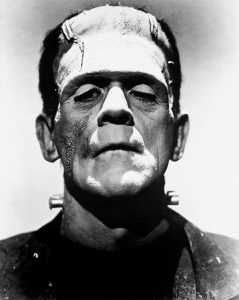 The article that this quote was taken from actually discusses a fascinating experiment due to take place within the year. The experiment will be the first real attempt to transplant a head from a living human to a donated body. The donated body is intended to be brain dead, matching the patient in sex and relative age, and permission for the use of the body will be granted by the person’s family. Among a plethora of complaints and warnings issued by surgeons and other scientists, there are several compelling points made in opposition. One is the quote I used earlier, suggesting the mind of the patient would have difficulty coping with it’s new body and would potentially be left in a worse off place than before. On the off chance that the surgery is a success and the man (who previously had a perfectly functioning brain but degenerative body condition) is able to gain full use of his new body, new problems arise. They mention the possibility that this patient has children, which would contain none of his own DNA, but instead the genetics of the donor body. Who would those children belong to? Do the parents of the donor have any claim? In any case, even if the experiment is a success it is entering dangerous and uncharted territories. It is also significant to note that this surgery was successfully tested on mice, and the same method for reconnecting the spine was applied to a dog with a full recovery.