Good and Evil on the Long Voyage 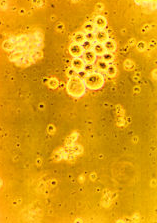 The “immortal” hybridoma cells under a microscope.

The intersections of bioart, the immersion of art and biology, and the expression of concepts and reactions to the concept of immortality is an area readily explored by many artists, scientists, and students alike, with intense modern focus on the extension of life through laboratorial cellular interventions. Bioartist Paul Perry focuses on this topic with his piece Good and Evil on the Long Voyage, where the creation of a “new cell”, called a “hybridoma”, was created, with the help of Prof. Dr. Frans Ramaekers and Mr. Wiel Debie from the Department of Molecular Cell Biology & Genetics, University of Maastricht, for an exhibition entitled “Preservations”, which was shown between December 1997 and February 1998 in the Bonnefanten Museum Maastricht in the Netherlands.

The hybridoma was created by fusing one of Perry’s white blood cells (lymphocytes) with one of a mouse’s cancer cells (myelomas). After 10 million attempts, and prompting the surprise of the scientists, which, as Eduardo stated made him “realise exactly how unique our fusions were,” one cross-species trans-gene fusion stuck. As Perry states, this “hybridoma culture we created is, in principle, ‘immortal’.” The immortality is constituted by the cancerous nature of the cell taken from the mouse, as it perpetually reproduces itself, and, with Perry’s influence, now perpetually reproduces a bit of himself along with it. 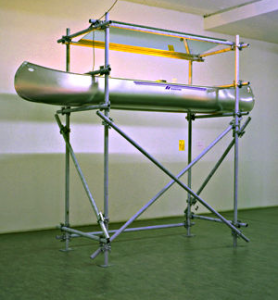 The complete work on display in the former Bonnefanten Museum.

Perry’s Good and Evil on the Long Voyage comes from his own explorations of the most basic constituents of life, a “desire to identify and elaborate the ‘Genesis Barrier’, the form that maintains difference, the wall that separates difference in species.” As this man and mouse cell goes on, and on, and on, it begs for answers to where the man begins and the mouse ends, when in fact, neither are actually ending.

Interestingly, contrary to other pieces of Perry’s that deal with or have attempted to conquer these questions with a human female egg, this piece was “a less controversial (but probably much more radical) method to ‘do some art’ in respect to convergence and divergence.” The time of the creation of this piece, in respect to its existence on a webpage twenty years later, may reveal truths about the anxieties popularized by religious, scientific, academic, and other factions and how they change over time with the change of what it popularized medical knowledge and domain. 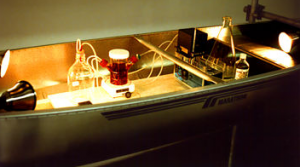 The bioreactor sits in the middle of the canoe. The pink flask to the left is the culture.

A piece that existed before the internet, one that is focusing on the most individuating concept, that which creates any discussion for the “natural” or fate-determined purpose for difference itself, will certainly take on new meaning if the internet allows us to escape a bodily process of attempting to find immortality. It is also interesting to pose that the only key component of immortality could be related to the smallest quantity of difference, that essential “one” that is also “two”, or mutates from one to two or two to one or from the many to the none or from the none to the many. If difference, change is the only way we can tell that we are moving, how fast does it go and how slowly can it possibly go?

Good and Evil on the Long Voyage deals with these questions of speed of change, of the true essentials of differentiating difference by showing a viewer a canoe, suspended by a metal frame, over which a mirror is placed so that the viewer may see that inside the canoe sits a red bioreactor, wired up to a “pink” flask that contains the immortal specimen. Having to look up, having to see not even the real reactor or flask but seeing a projection through a mirror, being under this floating thing that imposes there should be a stream of water underneath it for it to move in the first place, is vessel-happy and kind of funny to look at without understanding its significance. This also brings accessibility questions to this piece, how much would a person have to understand biology to see the significance of this work? How many people did see it for the amount of money, effort and time exerted into 10 million tests that could’ve gone straight to cancer research instead? As Perry details, “For the exhibition, I insisted on the hybridoma being physically present (no pictures man,- I want the real thing). A cell culture is usually maintained in an intensive care unit called a bio-reactor- a very expensive device.” How do those who could never escape negative consequences of cancer access this work and feel about it? And could its meaning potentially outweigh any of those consequences? What kind of authenticity must be authorized here for this to have a truly positive meaning in our society?