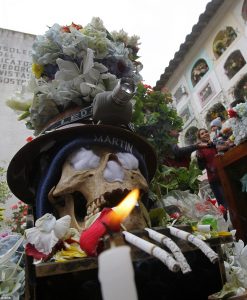 For the Aymara people they believe that a person’s being is comprised of seven souls. One of these souls stays with the skull of an individual when he or she dies, and has the power to provide protection, heal, and enter into a person’s dreams. These skulls are called natitas and every year to mark the end of the All Saints holiday, they are decorated and taken to mass in a festival called the Day of Skulls. This Modern Aymara cultural concept of immortality, is reflective of a history of colonization and oppression of the Aymara people by modern state structures.

Aymara people are descendants from the Andean Tiwanaku culture that inhabited the lands around Lake Titicaca before 1100 a.d. The Tiwanaku had formed a civilization around agricultural prosperity where around one million people worked and lived. Without ever having a leader or king exacting authority over the Tiwanaku, they were able to form a flourishing communal society. The landscape surrounding lake Titicaca is very difficult to maintain and required everyone to work together to yield a harvest. Societal relations were maintained within the Tiwanaku through festivals that were held throughout the year.

During Tiwanaku festivals people would dress in bright gaudy clothing, perform ritualistic dances, and carry out sacrifices to their gods. Llamas were sacrificed to appease their gods in hopes that the gods would in turn bless the Tiwanaku with a bountiful harvest. If the recent harvests hadn’t gained much surplus the Tiwanaku were also known to sacrifice other humans with hopes that the gods would look favorably on the people and bless them with better weather conditions to produce a better harvest. This act of sacrifice highlights how a sense of community with the living is extended to include people after their death. Sacrifice was not done in vain, but rather for a reason that would benefits those who still existed in their mortal bodies.

Due to a changing climate archeologists have determined that Tiwanaku civilization fell in part due to the lack of glacier runoff that was needed to water the fields in the Andes mountain. Smaller Tiwanaku communities still existed into the late 15th century when the remaining Tiwanaku were colonized by the Incas, and then again by the Spanish in the 16th century. The Indigenous culture that inhabited the land around Lake Titicaca became infused with that of Spanish culture, mainly that of Roman Catholicism. This new infusion of other culture lead to the redefinition of the Indigenous people, to become named the Aymara people.

Since Bolivia’s independence the Aymara have been traditionally leftist and are known to fight against repressive state regimes in order to help gain more recognition as political and social actors. The marginalized Aymara people are estimated to have one out of three households living below the poverty line, and have repeatedly had to fight to protect their land from being privatized. The over reaching arm of the state offers insight into the understanding into the Aymaras concept of immortality.

Many of the natitas that Aymaras keep have been collected from abandoned graves. “Bolivian custom is to remove human remains from graves or tombs after eight years for the families to incinerate. But some remains go unclaimed” (Valdez). Thus, the souls that are contained within these skulls are also uncared for, much like Aymara people as a whole. There is a symbiotic relationship that emerges with the care of natitas. The forgotten souls of the dead are cared for so that the souls may be at peace, while the marginalized Aymaras also receive protection from those that have already passed. These natitas are then passed down through generations, and every year are taken to mass during the Day of the Skulls. The communal relationship formed with forgotten immortal souls, is representative of the struggles that this Indigenous culture has been faced with throughout history. The continually displaced Aymara people take care of, continually displaced souls with the hopes that both may have a better existence, which is echoed in Leftist Aymara political beliefs.