The Talmud and Jewish Cultural Proliferation

The Talmud is a key text in Judaism recorded in the first or 2nd century CE over the course of 600 years. It is comprised of rabbinic discussions of the Oral Law, statutes not written in the Torah that were passed on through oral tradition from rabbis to students. Rabbis became concerned that the Oral Law would be lost because of Jewish diaspora do to religious persecution, so they decided to record it in a formal body of text. 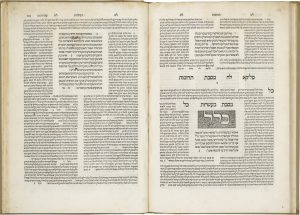 Rabbinic teachings of the Talmud explain in great detail how the commandments of the Torah are to be followed and interpreted. The Talmuds, especially the Talmud of Babylonia, also contain a great deal of commentary on biblical narratives, stories about biblical figures and earlier Rabbinic sages, and speculations concerning physical reality and human nature. In short, anything that was of interest to the Rabbis wound up in the Talmud, which in turn became a kind of encyclopedia of the Rabbinic mind.

The structure and visual layout of the Talmud is organized in a way that demonstrates it as a dialogue building off of the six seders (the categories mentioned above). It looks like a matrix, but it is logically formatted so that commentary and discussion between rabbis regarding biblical text is clearly understood. After the 600 year written process of the Talmud ceased, the Talmudic discourse continues to present day as scholarly practice– again back to oral tradition.
This relates to notions of group immortality, continuity, and de-extinction as the Tlamud acted as an agent or religious and cultural preservation for the Jewish people who have experienced millennia of diaspora that may have compromised the uniformity and sanctity of Judaic law. The 6-century-long discourse continued to proliferate and breed strong values and cultural identity for a group of peoples that, at multiple points throughout history, have been in danger of lost. The fact that the Talmud is regarded as a living text because of its participatory nature enabled the values to be passed on through generations, written and orally.

What Is the Talmud?