The planaria experiment was entirely unique for me, having not been in a lab setting or taken biology in several years.  It was also contrasting to the way we have studied the concept of immortality thus far in the course, through readings, lectures, podcasts and video platforms.  To be able to see with my own eyes a naturally occurring event of regeneration was bizarre and filled my head with a great deal of thoughts pertaining to the concept of immortality which I will discuss later. I myself chose not to do any slicing as I prefer not to harm, kill or eat animals, simply out of personal preference/ethics.  We even named the planaria test subjects, which most of the class found silly.  I could see some of my classmates express some shame, some disgust and some hidden excitement upon making the incisions on the planaria on Day 1.  I imagine such reactions would be different  if we were to perform a similar experiment on a different animal, depending on the size and size of course.  It was interesting being given prior to conducting the study the information that the worms had the ability to regenerate, however the way in which it would occur and the circumstances for which it would be able to happen were surprising.  We had little hope for the second worm, where we cut the head and tail off, leaving just the torso to regenerate.  Nonetheless, it was able to grow an entirely other worm, as did the last worm (Shirley) who underwent no incisions but was starved like the other two.  The shock we felt when discovering that all three planaria were alive and even regenerating more than expected was obvious.  It was even more shocking how they were able to regenerate in such a short time span of a week.  However, it was very peculiar to see the partially formed body parts and half grown clones in the petri dish. 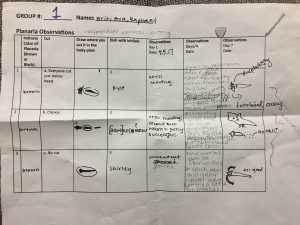 The experiment overall brought new light to the notion of regeneration in my eyes.  We think of reanimation as being something fantastical, terrifying, impossible, a product of Hollywood and science fiction.  We imagine it as a phenomenon that goes against the natural order of things.  Yet to see something as harmless and simple as a planaria with seemingly supernatural capabilities transforms preconceived beliefs of regeneration for me.  It is out of biological necessity these animals perform such a power.  And humans have already been able to artificially duplicate other species in lab settings. Yet, if we were able to finally achieve self cloning or even bring another human being back to life, the consequences would be unsettling and amoral.  We presently see scientific experimentation on other persons being unethical, as history has shown during WWII when Nazi doctors used Jewish and other concentration camp inmates as lab rats.  Nevertheless, those who aim to lengthen our life expectancy and inevitably make death obsolete are pushing for these lines to be crossed.  Yet unlike with the planaria who’s intentions are for biodiversity and perpetuation of their species, humans would perform such God-like procedures to narrow the spectrum of variation and inevitably use biology to push a racial hierarchy agenda like the Nazis, in my opinion.  I feel as though as long as there’s the capacity to manipulate life span, create human carbon copies and regenerate, such technology would be placed in the hands of those with economic privilege, ultimately, ultra wealthy white individuals.  I am afraid of any kind of advancement in science and medicine that can infringe upon one’s ability to halt death and am wary of those who are funding these possibilities.  Having such control over an individual’s life is not a power reserved for humans, which is also why I was uncomfortable performing the experiment on the planaria alone.  Reflecting on the experiment in relation to our class, I wonder what a regenerated individual would be classified as.  Would they be considered immortal – defeaters of death?  Would they have visions of the afterlife, or an out of body experience?  Would they have gained insight on what it is to be alive and what it is to be dead?  Would the clone have memories from their alternate?  What would the social implications be if one could never simply die forever and would there be a shift in how we view suicide?

https://drive.google.com/file/d/0B-RFqY4kshCLMWhXd2p5XzBJSlU/view?usp=sharing
The inattention to size changes was definitely a detriment to our observations here. As my videos demonstrate, the older worms are definitely much larger than those produced only a few days ago as an act of desperation in order to find food. Greater philosophical questions lie in that concept, the rapid production of an individual, or a mimesis of that individual in an environment as a tactic to support life. If this is in order to diversify the gene pool of sorts, to pass on some characteristics of the worm before it is valueless entirely, but to also attempt to collect new tactics of survival by embracing a change in the offspring, it would be a sort of positive framing of death, as a narrative that accepts that all have some genetic makeup that worked out at least for a while that pass on and that there is some hope to find another characteristic that aids in survival, perhaps eventually cross-species, that is outside and dependent on the existence of difference and the other.