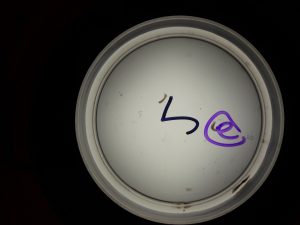 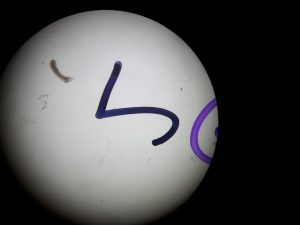 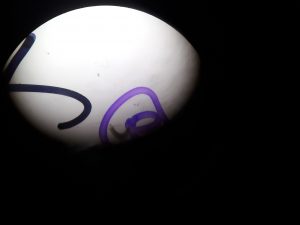 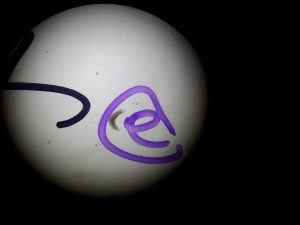 For the planaria lab I (Dylan) was in group three with Mike and Steve. Steve had asserted that he did not want to physically cut a worm himself so, for the two worms that needed to be sliced, Mike and I had authority over a single worm. The three of us made individual hypothesis about what would happen to each worm, that we shared amongst each other. However, the ultimate decision of what would happen inside the dish of the soon-to-be sliced planaria was left to Mike and myself.

For the worm in my dish, my intent was to cut it in half through the length of its body (in order to explain how the worm was cut I am going to compare the anatomy of the worm to that of a human, but only for the purpose of better imagining what portions of the worm I cut in relation to its head and the tip of its tail). When I tried to slice the worm in half lengthwise with a glass slide, I was unable to get a clean cut because I wasn’t able to keep the worm from curling up long enough to make that happen. As a result the portion of the worm I separated was a piece that extended across where a shoulder would be, down the center towards the navel (just above the pharynx) and back out to the same side of his would-be cut shoulder. From listening to the general chatter coming from other groups, it seemed that people were just doing a single cut on their respective worms. Since my cut was unsatisfactory to my standards I decided to also cut the tip of its tail off below its pharynx. If you can imagine, where its knees would be. Without knowing exactly how planaria worms regenerate, I predicted (or maybe I just hoped) that the larger part would grow another head out of the center wound since it was so close to its original head. For the other two separated pieces I also predicted that fully functional worms would regenerate by the time of our next visit.

Upon our return to the lab there was a single fully functional worm that was symmetrical. In the dish it was surrounded by two other worms that had regrown heads, but were not symmetrical, each had an odd lump on one side of their body. These worms were not responsive to light, and kept swimming in circles when I provoked them with my pen. As was explained in the lab, the location of the cut can dictate how long it takes the planaria to fully regenerate. I believe if I were to have gone back there would be three fully functional worms, two of which, would be smaller than the worm containing the original head.

Throughout both of the labs, I cannot say that I felt any sort of empathy towards the planaria test subjects. Perhaps this is because of my belief that humans seem to be the only species that have the ability to destroy our own existence and the existence of many other species (if not all). With this logic, anything that could be learned from cutting a species who has the biological capability of reproducing anyway, can then be applied in my own life to fight anthropocentric behavior. Since some people have the ability to selfishly destroy entire environments, I believe people share an even greater responsibility to preserving or facilitating other forms of life. This is a more recent logic train that I have been cultivating, so perhaps my lack of empathy could maybe be rooted in my past lived experience with being an infantryman. Either way, the most perplexing thing for me was that there were a handful of people in the lab that did not want to cut a worm.

Worm 3 lived a tediously boring life. His comrades suffered the cruel blades of justice while he was left alone and unscathed to sit in a dark room unfed for a week. Rumor has it that Worm 3 budded, attended a few university classes, and then consumed his biological equal. There is no evidence of these claims, as his Petri dish appeared exactly the same as it was the week before. He could hear the whimpers of the other eviscerated planaria at night, but it only made him feel more satisfied in his own situation. A life of mutilation is unknown to Worm 3 and will forever remain that way.
By gaffd930| 2017-04-26T06:19:06+00:00 April 26th, 2017|Experiments|Comments Off on Group 3 Planaria Lab