Supermarket of the Dead 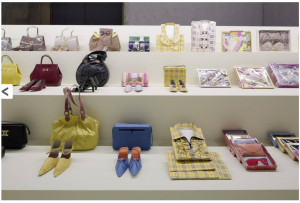 I have been intrigued with the ‘Supermarket of the Dead’ ever since I first found the English catalogue in the Perez Art Museum in Miami. ‘Supermarket of the Dead’ was a show organized in Germany at the Dresden State Art Collection. More on the details below, or on the website, but just coming off the Chinese New Year and the ratatatat of firecrackers in Chinatown, I thought I’d bring up this show and its catalogue as an inaugural object of scrutiny.

The show is about the contemporary manifestation and transformation of what the curators call “one of the oldest Chinese folk beliefs”: today, the old practice of burning paper money and paper goods for the sake of ancestors and the dead, has been updated to include paper replicas of a crazily comprehensive range of consumer goods. This is how the press release describes the show: “In more recent years, the paper models have undergone a transformation in which emulations of traditional objects have been supplanted by replicas of consumer products found in western department stores. The living want to provide their relatives in the hereafter with the same goods that they themselves desire. This has led to an alternative universe made of paper in which nearly all the globalised fetishes of brand consumption—Gucci bags, Prada shoes, Louis Vuitton suitcases, Chanel accessories, mobile phones, Apple computers and even Heineken beer cans and life-size cars—are committed to the flames as a tribute to the ancestors.”

The show’s catalogue, originally in German, has been translated – it is a hefty and expensive 3-volume affair, with one book of essays and 2 books of color photographs. I never saw the show, but it seems it was laid out like a display in a Prada store, which is not inappropriate, as a/ the curator was relating this particular Chinese practice of burnt offerings to theories of commodification, turning the brand names of capitalism into quasi-religious objects, and b/ a bulk of the stuff on view came from “the collection of the Hong Kong artist Rosanna Li, who has amassed hundreds of paper facsimiles of shoes over the past decades, providing a clear reading of the recent developments in such simulacra for the purposes of ancestor worship.”

The idea that value and alongside it commodification have a strange mysterious aspect is, of course, Marx’s. The mystery was not some essential one for Marx; he explained it as the effect of erasing the exploitative social relations that underlay production, and allowing goods to vie in the abstract space of the market as though they were things independent of human relations. That’s why he called it commodity fetishism, appropriating a term used by colonialists to denigrate the animistic practices of others. In commodity fetishism says that in the supposedly utilitarian realm of market relations it is actually the symbolic value rather than the use value of goods that are traded. This can be a pretty critical cut into political economy if you consider that the whole market ideology is based on the claim that demand represents people’s true needs and interests. Separating use value from symbolic value allows us to see needs and interests as belonging to the world of myth, with shop windows as a kind of reliquary or a shrine with mass-produced icons on sale.

The parallel space between the mythological world of commodities and the mythological world of dead Chinese ancestors is the space occupied by the book and the show – or maybe not the parallel but their family resemblance, explaining in some quasi-structuralist way how and why one quickly accommodated and transformed the other as China’s capitalist markets developed.

The long essay by the curator claims that the traditional Chinese ideas did not include a reward-and-punishment view of the afterlife like the ones in monotheistic salvation religions. But they did have a purgatorial passage between this world and the highest possible spiritual world. The deceased didn’t dematerialize immediately upon death, however, and turn into spiritual beings; they had to go through a process and in that process of transformation the spirit of the deceased needed goods to assist them along the way. “Assist” shouldn’t be taken literally. For one, it’s doing something like ‘honoring’ work, where honor matters in both worlds. Also, it is acknowledging that there is a world of exchange, even in the afterlife = or rather that other worlds are also built on exchange, on social relations mediated through goods, amongst other things. What I glean further is that such an exchange may be taking place in a language, through a system, through iconography, that may not be accessible to us. The best we can do is burn our things and hope it gets to them. Burnt offerings take place in many places in the world – they appear in the Bible too. And I am not sure how this is different or how different this is – but the point is that the burning here is supposed to release the spirit of the thing. The smoke is the index – not the symbol – of the transformation of the thing into its spirit, into its other forms. Smoke is the spirit of the thing burnt. And that smoke, the spirit, may have ways to take on the necessary form in the afterlife in the land of the dead ancestor.

The logic seems to work; trouble is that it’s not the thing being burned, but a representation of the thing made out of paper. But perhaps once there is the idea that there is the spirit of the thing, then the spirit may also be embodied – not just represented – by the paper replica, by the same form.  As the Chinese saying goes, the separation between life and death is paper thin.

I am interested as always not in beliefs as such but practices through which we can cultivate an ethical relationship with worlds beyond our own limited human, fleshy, and epidermally-contained selves. There is a process of exchange – an acknowledgement that our lives ad deaths and the nature of existence itself is relational, made by exchanging matter and ideas with other units in the universe. At the same time, I am in some perhaps atavistic way, an old-man-Marxist way, horrified by the glorification of commodification entailed in this transformation. Somewhere I was hoping the dead would be saying no to Coca Cola and Gucci.

Of course, it’s notable, instructive and problematic that all this – ie what I’m discussing here – is taking place in the art world. The art world is the godhead of all fetish machines; it is where objects are transformed into things with some sort of transcendent importance, what we call art. Museums have been regarded by many as secular cathedrals and their role in sucking the animus out of objects has been analyzed in different places, in different ways. It seems that the museum here is playing its old colonial role somehow, despite the theoretical essays of the contributors, for the displays do seem to be sucking the smoke out of the objects. That they have become collections and art pieces means that they can no longer be burned after all.  So this layers things with more and more mythmaking – the museum objectifies a Chinese practice that fetishizes consumer objects based on an older system of burnt offerings that projected a realm of the unseen. Maybe one way out is to read this sequence backwards, to suggest that everything first starts with the unseen.

About the Author: Abou Farman