Qin Shihuang, China’s First Emperor, ascended to the throne of the state of Qin in 246 BCE at the age of 13. During his 36 year reign, he defeated the kingdom’s neighbors, completed the Great Wall of China, and united the states in order to form most of modern day China. However, as soon as his ascension to the throne, the king also began preparations for his death, ordereing construction on a tomb that spans 22 square miles. In his quest for immortality, the First Emperor not only revolutionized concepts of wealth, burial, and death, but also the standardization of social and political life in China, becoming a crucial figure in it’s formation and current administrative order. He is also known as one of the most death-fearing rulers in history, killing entire villages that started rumors regarding his demise, and spending a fortune on discovering remedies for death. 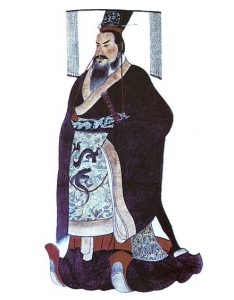 During the Emperor’s time, immortality was already an established concept, and so he worked relentlessly in order to find the cure for  death. This manifested in attempts to find both herbal remedies, as well as post-life remedies in case he was unable to find a cure prior to his demise. In a frantic race against the clock, the First Emperor searched to find an elixir of life, believing mercury capsules to be this cure. Ironically, this lead to his premature death. Furthermore, in the two months that it took to transport his body, only 5 people were aware of his death, and rotten fish was used to cover the smell– the level of decay going against any concepts of his immortality. In his life-long preparation for his own burial, the Emperor was laid to rest in the tomb (palace) he commissioned, which took 700,000 men to complete. This mausoleum was complete 8,000 soldiers, 130 chariots and 670 horses made out of terracotta, all placed to protect the emperor in the afterlife. Additionally, so that the labourers would not spread word of the wealth within the tomb, they were ultimately sealed inside with the emperor. 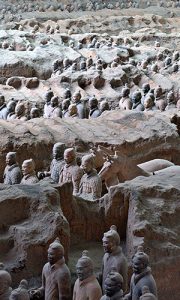 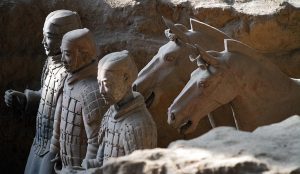 The most striking portion of this incredible feat is perhaps the individuality of each terracotta soldier– no soldier has the same features or clothing. Furthermore, the sealing of the labourers within the tomb creates another dimension of individuality and personification. This leads to questions regarding immortality, and the need for social recognition in validating it– why did The First Emperor require so many physical bodies to ensure his immortality, and how does the forced sacrifice of the labourers allow the Emperors relative immortality? What sacrifice by citizens is required for a ruler’s continuity? The individuality of each terracotta soldier speaks not to a mass army, but to real individuals tasked with guarding the emperor: he commands them even in death, frozen in stone. What lead to this choice of individuality amongst soldiers, why could none of them have repeating features? Does the commanding of such a vast number of individuals somehow strengthen the emperor’s power, as socially, he remains immortal? We would not know the First Emperor in the way we do today had it not been for his tomb, and specifically his terracotta soldiers; did the soldiers work as a tool to grant the emperor eternal social life?