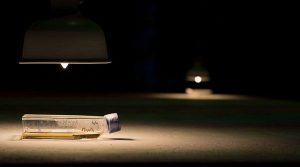 Bio-Artist Marta De Menezes, has no specific background in biology, but her work explores a unique intersection from the world of science and the world of art. She takes scientific techniques and adapts them to the production of her artwork to try and contribute to the scientific research of the laboratory (Menezes 2007, 225). For her installation Immortality for Two Menezes took immortal cells from her and her partner to project over top of one another on a large table. Menezes created these immortal immune cells “by introducing cancer-inducing genes in the cells with a viral vector” (Menezes 2015). The cells coming from this in-love couple cannot interact with one another or the cells will mutually reject one another. While the art piece was on display, one set of cells rested on one end of the table opposite of the other cells to illustrate how immortality may come at a price. The cells of the two lovers are stuck in perpetual isolation and Menezes’ solution to this problem was to overlap the projection of these cells on the table. “Only in the virtual space of their projection the immortal cells can interact” (Menezes 2015). With the assumption of a direct connection between simple cells and human life, this infusion of science, art, and technology raises questions about ever changing ethical regimes from the three fields.

Immortality for Two illustrates the idea that the way in which we manipulate biological material (in this case immune cells) might potentially be how we manipulate ourselves. What is there to gain from immortality? Is immortality a worthwhile endeavor when the idea is juxtaposed with what we stand to lose by becoming immortal? The two vials of ever-growing cells will never be able to accept each other physically, but can appear to interact with one another through the technology of projection. This proxy that facilitates the interaction of cells, is similar to the projections that we create everyday on social media. Online, the interactions between people are able to live for ever in the world wide web. Are the online interactions between two people, of any significant importance if individuals are biologically required to remain isolated? Does this change if the two are in love and technology is the only way to show any type of interaction? On the one hand there is a never ending love that is being shared by proxy, and adversely, if the cells were not immortal or altered they would be free to intimately, and physically interact with one another for a finite amount of time.

With new knowledge being found everyday in the field of science a critique of bioart in general arises. Is there an issue of accessibility between science and the general public? While cells are not able to make ethical decisions, ethical decisions are still being made when an artist decides to alter cells. With the knowledge of how to manipulate simple cells entering the public sphere, through non-scientists, and being popularized through art, there is an ethical dilemma displayed through bioart that asks if I can do something, should I, and what is at risk? Similar to the way Indigenous bio-specimens were gathered in the past–an increased knowledge of science and technology has greatly helped the public understand how social relations with Indigenous cultures in the past has been unethical in modern western thought. Menezes’ art may not answer the ethical questions directly, but viewing her cells as having the same attributes as humans her art creates affect in a way that shapes the role of art itself. Immortality for Two has now become an artifact that critiques concepts of science, technology, and immortality. This is being done while simultaneously making the critique of these concepts more accessible to the general public.