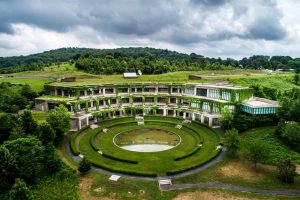 Instead of converting this gorgeous Mount Pony bunker into a storage place for audio-visual relics, we propose a re-development project to make it into a zen retreat center. Rather than using this space as a place for people to hide from death, we are upgrading Mount Pony into a place where people can be re-invigorated by life. We will utilize both indoor and outdoor spaces, increasing the value of the structure twofold by allowing residents to explore different levels of depth.

Our zen retreat center will utilize the inside of the repurposed nuclear bunker to provide reflective services such as sensory deprivation tanks, shouting rooms, therapy rooms, and silent areas. The existing underground infrastructure of the nuclear fallout shelter provides excellent spaces for those seeking experiences of isolation and calm, away from the commotion and noise of the external world. Located at varying depths underground, our indoor facilities provide spaces to our clients seeking moments of quiet introspection.

The use of the former Mount Pony nuclear center as a zen center allows us to improve upon the previously unused and under-designed outdoor spaces. Mount Pony’s exterior environment provides various different landscapes to re-work into new spaces for guests to interact. In the above-ground space shown in the picture above, we will create cooperative farming plots to allow space for group activities and an earth-centered experience. In the below ground outdoor area, we will repurpose the pool as a koi pond surrounded by a labyrinth for calm meditative purposes.

The repurposing of Mount Pony would not only lead to the effective usage of the space, it will also lead to the mental well being of those who attend, and a viable manner of creating an income which would help to further improve the facilities and sustain those employed by the retreat. This compound once being a building associated with ideas of chaos and destruction, will take on a new being, a structure associated with positivity and growth, rather than the thoughts associated with nuclear holocaust.

About the Author: fosso130