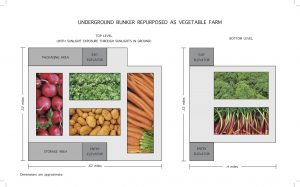 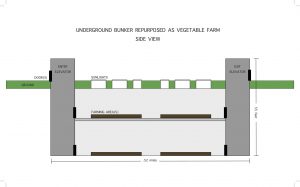 In many instances, the bunker is the site that epitomizes security; it is protected by means of seclusion, spared the potential risk of any interaction with the outside world. The bunker is sterile, and meant to stay that way. It is alarming to think of what kind of present values and fears prompt such apocalyptic imaginaries. What does it mean for a person to hope to survive an apocalypse only to spend the rest of their life eating canned foods in a windowless, concrete box hundreds of feet below the surface of the earth? What does this imagined future signal about one’s current quality of life? How might we reimagine the bunker as a means to embrace of our present state of being rather than inscribe a fear of a potential future into our built environment? Indeed, how might the bunker be remade as a productive, generative site that interacts with its surrounding environment, rather than a removed, secluded site that restricts and withholds all that takes place inside?

While growing food inside a bunker does not necessarily contradict the doomsday imaginary with which bunkers are typically associated, imagining the bunker as a site that can nourish a community that exists outside the bunker would seem to move away from such conceptions of post-apocalyptic existence. Numerous examples illustrate the possibility of growing plants underground, either directly in soil–using sunlight by way of reflective tunnels–or in hydroponic beds. The priority of this bunker/farm would be creating a sustainable livelihood in the present, rather than preparing for an unfortunate future. The underground site could accompany above-ground agricultural life or allow for the wild growth of non-human beings at the surface level by transferring human food production to a subterranean zone.